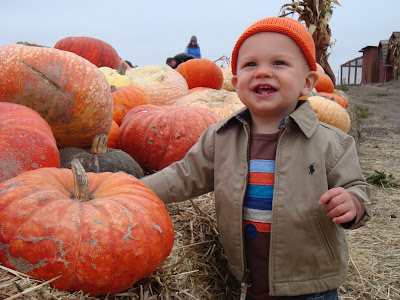 This weekend, Oliver's Grandparents Brian & Connie made the long drive down from Yreka to spend some time with us. Our big outing was a Saturday morning trip to the pumpkin patch in Half Moon Bay. For those of you who don't know, Half Moon Bay is the pumpkin capital of the world. They boast many, many pumpkin patches - some are pretty desperate, capitalizing on their proximity to the nearest seafood restaurant for business. Others, like the ones that cause ridiculous bumper to bumper traffic on highway 92, are simply amusement parks with dirty bounce houses masquerading as pumpkin patches. 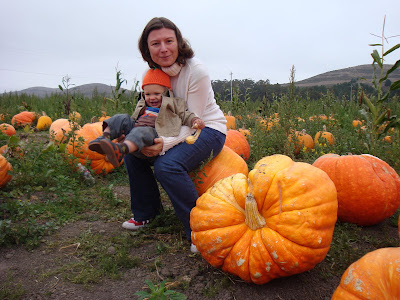 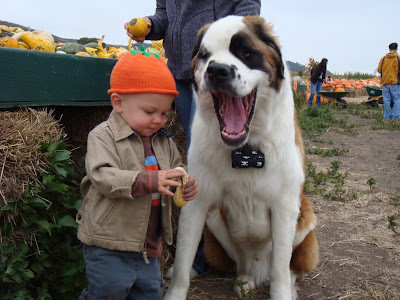 At Bob's, we had such fun. Oliver rode in a wheelbarrow, tromped through the patch, met his first St. Bernard, made friends with some sheep and goats, and tried his darndest to climb a hay pyramid (which was successful, with a little help). For me, it was a moment in which I felt so extremely lucky to be a father, seeing Oliver pat large pumpkins as if they were drums, smiling and babbling at the St. Bernard, walking around smiling and laughing the whole while. Enjoy the photos. More here. 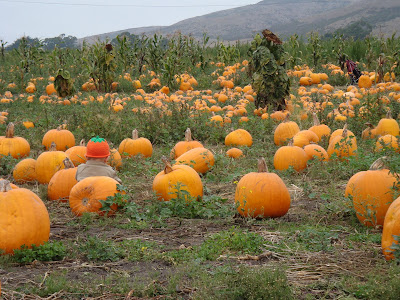 Posted by Amanda Linden at 7:54 PM