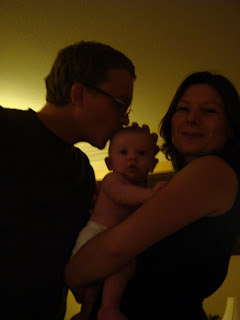 We made the trek up to Yreka last week for Thanksgiving with the Meeks. We drove through the night both times to account for Oliver's sleeping schedule and it worked like a charm. Thanksgiving itself was a blast - a full blown turkey dinner, featuring Oliver's first solid food: sweet potatoes! Just a smidge on mom's finger - so good! He slept in Amanda's old room from childhood at GG Nickie's house. They're very good friends, those two. Oliver also spent much time with his cousins Ella and Lucas. Ella even heard him say his first word - "Ella." No one else heard it, but she's certain. 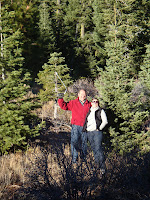 The town of Yreka had their holiday parade on Saturday, and Grandpa/City Manager Brian and Ella rode in the old fashioned fire engine. Grandma Nickie rode the Soroptomist's Club float, much to our surprise. That old gal's full of surprises. Later that afternoon, we dropped Oliver off with Grandma Magie and went on the annual Elusive Silver Tip Hunt with the family - the search for the perfect silver tip christmas tree in Klamath National Forest. Brian took us to a beautiful lookout with a spectacular view of Mt. Shasta and the entire Shasta Valley. We spent the afternoon in the woods, hunting trees and tailgating, and picked Oli up after dark.

Oliver, these days, is all about his feet and sitting up. His feet are very cool and he will proudly show them to you. He can't quite sit up, but darned if he isn't giving it his best shot every time he tries! We are very excited about his little tuft of hair, and will be encouraging if he wants a faux-hawk early on in his life. 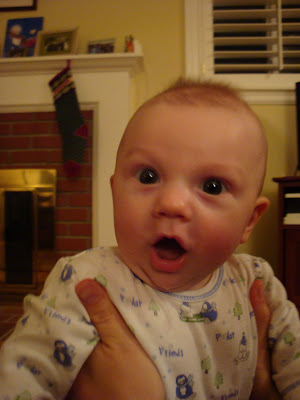 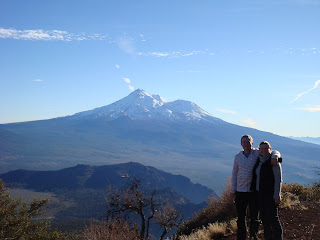 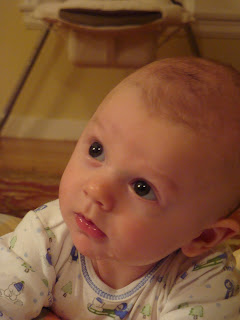 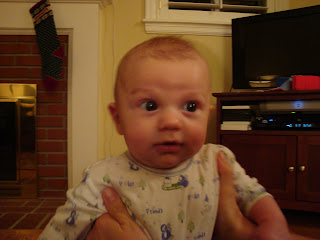