Hey! I have that one! 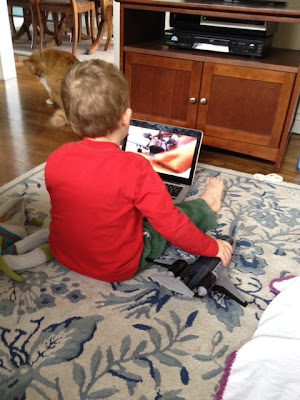 Oliver has become an avid collector of Cars 2 Cars. He has all except 2 or 3. He's such a fan that he likes going onto YouTube and searching for homemade videos of children playing with the toys he has and doesn't have, so that he can learn more about them. There is a guy online who is a big Disney/Pixar collector that Oliver has begun following. His handle is "Blucollection" and Oliver loves to mimic the demonstrations he does. He brings his toys to watch and follow along. Here he is watching a Sidley the jet video from the Vlogger while holding his own Sidley. It's funny that in a world where Oliver doesn't see commercials (we have Tivo and we use Netflix, HBOgo, Amazon, etc. for television content) he has found a way to consume commercial content. He definitely uses it as a way to learn about the toys he doesn't have, and to nag mom and dad about them!

http://www.youtube.com/user/Blucollection?feature=g-all-u
Posted by Amanda Linden at 9:19 AM