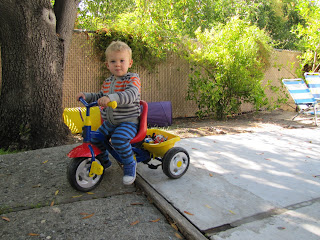 Oliver went pee pee in the potty tonight. The big potty. It was a pretty amazing moment for all of us. He's never really warmed to the potty chair we got him - he's been aware of it, but has always politely declined when we asked him if, by chance, he'd like to use it. We've only encouraged, never really pushed. He probably wonders why we expect him to go potty in there when we don't use it ourselves.

Oliver's typical post-bath ceremony these days is to throw off his towel and run and jump on the bed or sofa and roughhouse with me a little before bed. Tonight he did a little dance, then made a funny 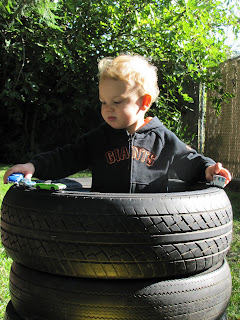 face and awkwardly squeezed his knees together. Speaking from a geeky developmental perspective, this suggested to me that perhaps he heard his brain this time when it said, "I'm about to pee," and physically reacted (woo-hoo!). I jumped up and walked him into the bathroom, where his little potty occasionally lives - but it wasn't there. So we propped his stool in front of the big potty and I helped him up. After 5 or 10 seconds, he peed. The little stinker!
We applauded and hoorayed, and he literally walked out of the bathroom with his arms raised above his head in victory (coincidentally, as I'm writing this, SportsCenter is on mute, and I just caught a glimpse of Brett Favre, arms raised after a touchdown pass - he looked like that). He 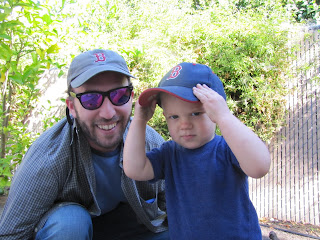 had another joyous flop on the bed and then went back to the potty with us to flush. As Amanda said, he was so excited that he forgot to flush.

Another big change that is around the corner is that he's about to start school this week. He'll be in the program I ran the last three years I was at Bing - the MWF AM 2's program. Mark and Colin, 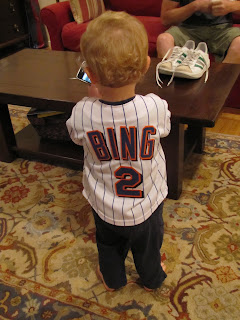 who he knows, will be his teachers and we feel like he's just going to love it. He'll be the youngest in his class, which is fine by us, because lord knows that boy loves hanging around older and bigger kids. He's speaking a lot these days, and is stringing together 3-word sentences at times (his favorite phrase still being "root beer float" - and yes, Mom, we credit you for the root beer introduction. It's at the point where it's still called a root beer float without the ice cream. The boy just loves his root beer!). Point being, I think he'll benefit from being exposed to so much more language. He'll be there for an hour on Wednesday and then for the full 2 1/2 hours on Friday. Grandma Connie sent him a monkey backpack for his birthday that he wore happily on our trip to Ikea today. We'll let you all know how it goes!
Posted by Matthew Linden at 8:32 PM